MOSCOW (AP) — About 250 militant Armenian nationalists gave up their weapons Thursday after the republic declared a state or emergency and surrounded their headquarters with soldiers, police and tanks. The surrender was a major victory for Armenia’s parliament, which declared independence from the Soviet Union last week. By reining in the militants with forces under its direct control — no troops from the central Soviet government were involved — the parliament dramatically emphasized its authority.

Lawmakers had voted unanimously Wednesday to outlaw the militant group, which called itself the Armenian National Army. The vote followed a night of violence in which militants attacked a gas station, killed a legislator and fired automatic rifles at a rival organization’s headquarters.

The militants, holed up in three buildings in the republic’s capital of Yerevan, at first ignored an ultimatum from the parliament to surrender by 10 p.m. Wednesday or face a military showdown, Armenian officials said.

After several hours of fruitless negotiations between parliamentary representatives and Armenian National Army leaders, about 500 government soldiers and police moved into the buildings at about 1:30 a.m. Thursday. They met no resistance, Soviet media reported.

Later, two leaders of the paramilitary group appealed on television for the remaining members to turn themselves in peacefully. 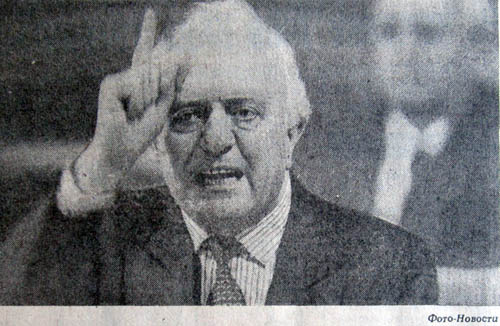