YEREVAN, Armenia (AP) — An International initiative on stopping the war for the Nagorno-Karabakh enclave received a boost yesterday when Azerbaijan backed the plan and Armenia gave conditional approval. The proposal by the United States, Russia, and Turkey calls for the withdrawal of Armenian troops from Azerbaijan’s Kelbajar region and a 60-day cessation of hostilities beginning Wednesday, to be followed by peace talks.

The three countries said the plan, announced Monday, must be accepted or rejected in full.

More than 3,000 people have been killed in five years of fighting over Nagorno-Karabakh, a mountainous region in Muslim Azerbaijan populated by Christian Armenians. The fighting has been the bloodiest ethnic conflict in the former Soviet Union.

Azerbaijan’s secretary of state, Panakh Huseinov, announced his country’s full acceptance of the plan at a news conference in Baku, the Azerbaijani capital.

Armenian Deputy Foreign Minister Gerard Libaridian said his country reacted positively to the proposal, but he withheld full acceptance because of reservations by leaders in Nagorno-Karabakh.

Mr. Libaridian said at a news conference the enclave’s leaders objected to full withdrawal from Kelbajar without any provision for International observers.

The overrunning of Kelbajar by Armenian forces last month opened a large corridor between Armenia and Nagorno-Karabakh and touched off the flight of about 40,000 Azerbaijani refugees from the area.

The United States, Russia, and Turkey came up with their proposal in an effort to restart peace talks that broke off after the fighting in Kelbajar.

“It’s very important in the sense that we have three of the big actors,” Mr. Libaridian said. “They worked out something, and we take it seriously. We hope it is not formulated as do or die.”

The proposal’s timetable calls for negotiations May 17-22 in Geneva. That would be followed by talks May 24 and 25 with the 11-nation Minsk group of countries from the Conference on Security and Cooperation in Europe, which has been seeking a political solution. 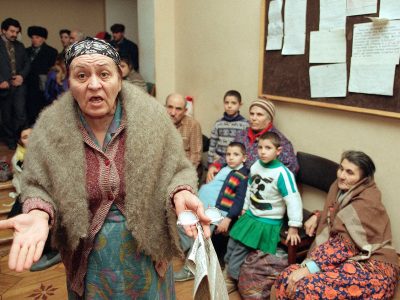